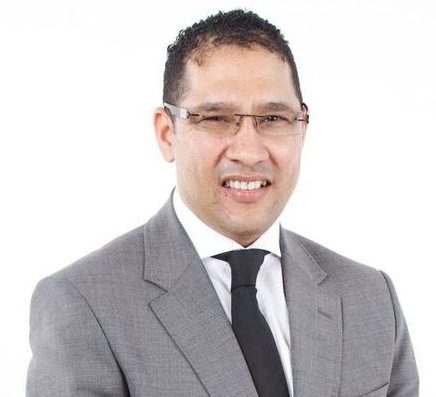 The food processing industry in Saudi Arabia is well-positioned to grow at a considerable rate in the near future. Domestic, regional and international demands for Saudi food products have been increasing year on year, with seafood, dates and halal foods leading the way. The Kingdom is famed for its authentic halal food products — particularly those from Makkah and Madinah. The Kingdom’s halal food market is currently worth $6 billion, but it has the potential to take a substantially bigger share of the $1.3 trillion global halal market. The sector also benefits from a well-developed ecosystem that meets the high standards and growing demands of the expanding marketplace.

Despite short-term economic challenges and cautious spending in 2017 due to the VAT, expat fees, and higher utility prices, the food industry in Saudi Arabia stayed strong. Saudi Arabia’s Food and Beverage (F&B) market is the largest and most attractive in the Middle East, valued at $45 billion and predicted to grow at a rate of 6 percent over the next five years. That growth is being driven by several factors, including the Kingdom’s expanding population and the increase in Hajj and Umrah visitors.

In 2018, the Saudi food industry accounted for 10 percent of gross domestic product (GDP), highlighting its importance as a leading KSA sector. The average household reportedly spends 18 percent of its total expenditure on F&B, meaning the Kingdom’s domestic demand amounts to 60 percent of total consumption in the GCC. Around $70 billion was spent on food consumption during 2018 in the Kingdom.

2018 also saw a 10 percent increase in food imports, and that figure is expected to increase to $35 billion by 2020, raising the prospect of significant import-substitution opportunities for Saudi F&B producers to serve the untapped demand for local dairy, meat and fruit products. Furthermore, F&B players in Saudi have easy access to growing and under-supplied markets in the GCC and MENA regions. 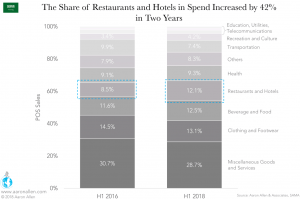 With 31 million residents and an annual population growth rate of 3.3 percent, Saudi Arabia has the largest population in the GCC. Over 50 percent of the population is under 25, and the youth of Saudi Arabia are particularly susceptible to Western consumer trends.

However, in order to benefit from potential growth, market players need to address the changes in consumer behavior that are shaping the sector. Saudi consumers are becoming more health conscious, something market players should address by providing foods that are sugar free, low in salt, fat free, and do not contain preservatives and chemicals, or functional foods that oﬀer specific health benefits. Interest in food delivery is also growing fast in Saudi Arabia. 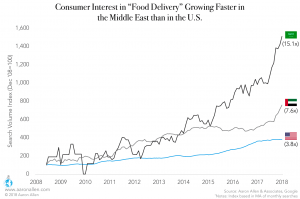 According to the Saudi Arabia General Investment Authority (SAGIA), the Kingdom is expected to see around $59 billion worth of investment in its food industry by 2021.